Walled Lake, MI – September 12, 2014 – Walled Lake Western High School and the Western Warriors football team, with the support of the Walled Lake Consolidated School District will host the Fourth Annual “Warriors for Warriors” (W4W) cancer fundraising event on Sept. 26 for the three charities: Susan G. Komen Detroit Race for the Cure; St. Baldrick’s Foundation for Pediatric Cancer and the American Cancer Society. In their first three years, Warriors for Warriors has raised over $200,000 and over 170 people have been honored during these touching ceremonies. 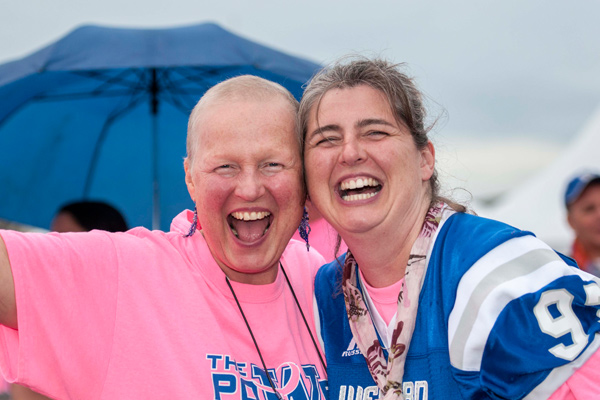 On Friday, Sept. 26, the Western Varsity Football team will participate in the annual Pink-Out game against the Waterford Mott Corsairs. The stands will be a sea of pink warriors. Students and fans alike will be wearing their new 2014 pink shirt. The 2014 shirts, designed specifically for this year’s Pink Out football game will be the wearer’s entry into the game. They will be sold prior to game day throughout the community for $15. Shirt purchases can be made at Your Salon, Tricho Salon, Yoberry. Walled Lake Western students and staff also show their support weekly by wearing their pink t-shirts on what they call “Warrior Wednesday.” To date, over 1,000 shirts have been sold for this year’s event.

This year, the Honorary Captain for Warriors for Warriors is Sydney Balzer. She is a fifth grader at Commerce Elementary who has endured Leukemia not once, but twice! She has used her experiences to help others and founded her own Community Service Project- Colors for Cancer Kids.

Christina Carlin, Commerce Elementary Principal says, “Commerce Elementary is incredibly proud of Sydney. Her bravery, strength, and selfless spirit are an inspiration to us all. Sydney’s courageous journey has touched people’s hearts and reminded us to slow down and cherish the ordinary, everyday moments. After conquering leukemia for the second time, we couldn’t be happier to see her arrive at school every day with a smile on her face. She truly has the heart of a warrior.”

To kick-off the evening, a “Warriors’ Survivor Parade” will begin at 6 p.m. It is notable that the parade is open to those who have been touched by any form of cancer. Patients, Survivors and those Warriors who wish to honor the memory of friends and family who lost or are fighting their battle to cancer are welcome to join in the march. Participants only need to purchase a Pink-Out t-shirt to take part in the parade. Members of the Band, Choir, Cheerleaders, Poms, Football Team and Walled Lake Western Student Groups will lead the parade, into the stadium and around the track to recognize these courageous individuals whose lives have been touched by cancer.

Prior to the 7:30 Kick-Off, Western football players will line the field from end zone to end zone wearing pink jerseys that have been sponsored in honor or memory of loved ones. During this touching ceremony they will stand side by side with jersey honorees and their families. WXYZ Anchor/Reporter and host of The Now at 4 p.m., Brad Galli, will be the guest emcee during the moving Jersey Ceremony.

“Our Warriors for Warriors Pink Out is going to be bigger and better than ever in 2014” says Western Football Head Coach, Mike Zdebski. “The organizing committee, parents, students, community members, and school district members have made this the strongest event in Michigan and is another reason why Walled Lake Western is the best high school in the state!”

Kenneth Gutman, Superintendent of Walled Lake Consolidated Schools states, “We continue to be grateful for the selfless dedication of parents, staff members, community members and all of the countless volunteers who support the fourth annual Pink Out effort. Breast cancer and all cancers continue to challenge thousands of people, and we will continue to work together to eradicate it.”

Since its inception in 2011, the Warriors for Warriors project builds momentum each year. In the fall of 2013, the project was recognized by the NFL and featured in a 30-second commercial that was shown during NFL football games. In addition, the Lions football organization hosted the Warriors for Warriors team as they were honored for the way the Walled Lake Western High School community fights cancer.

You can also contribute to the event by making an online donation.

Your donation could be the one last dollar that leads to a cure!