Walled Lake Western High School and the Western Warriors football team, with the support of the Walled Lake Consolidated School District will host the fifth 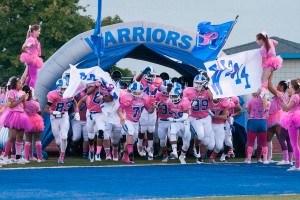 annual “Warriors for Warriors” (W4W) cancer fundraising event on Oct. 2 for the three charities: Susan G. Komen Detroit Race for the Cure; St. Baldrick’s Foundation for Pediatric Cancer and the American Cancer Society. In their first four years, Warriors for Warriors has raised over $272,000 and over 250 people have been honored during these touching ceremonies.

On Friday, October 2, the Walled Lake Western varsity football team will play their cross town rivals, the Walled Lake Northern Knights as both teams participate in the annual Pink-Out game. The stands will be a sea of pink with spectators and supporters from across the District in attendance. This year’s 2015 Pink Out shirts will serve as the wearer’s admission into the night’s game and will provide funds towards the overall fundraising goal. Shirts will be sold prior to game day throughout the community for $15. Shirt purchases can be made at Your Salon in Commerce and Tricho Salon in Novi. To date, over 1,000 shirts have been sold for this year’s event.

This year, Warriors for Warriors decided to name two Honorary Captains that will be recognized during the celebration and join the teams on the field for the pre-game coin toss. This year the Honorary Captains are Mackenzie Rajdl and Kevin Saarela. Mackenzie was diagnosed with leukemia at the age two and she continues fighting the disease today. Kevin was diagnosed with medulloblastoma at the age seven, now at age 15 he has been cancer free for seven years.

To kick-off the evening, a “Warriors’ Survivor Parade” will begin at 6:00 PM. It is notable that the parade is open to those who have been touched by any form of cancer. Patients, survivors and those warriors who wish to honor the memory of friends and family who lost or are fighting their battle to cancer are welcome to join in the march. Participants only need to purchase a Pink-Out t-shirt to take part in the parade. Members of the Band, Choir, Cheerleaders, Poms, Football Team and Walled Lake Western Student Groups will lead the parade, into the stadium and around the track to recognize these courageous individuals whose lives have been touched by cancer.

Prior to the 7:30 p.m. Kick-Off, Western football players will line the field from end zone to end zone wearing pink jerseys that have been sponsored in honor or memory of loved ones. During this touching ceremony they will stand side by side with jersey honorees and their families. Spike, cohost of Mojo In The Morning on Channel 955, will be the guest emcee during the moving Jersey Ceremony.

Kenneth Gutman, Superintendent of Walled Lake Consolidated Schools states, “It is heartening to be a part of a group of people—staff, parents, students, and community members—who give so willingly to help those in need. This annual event demonstrates what a true community coalition can accomplish and the great lengths it will go to eliminate cancer.”

Tom Holzer Ford and Warriors for Warriors will be partnering to raise up to $6,000 in support of cancer research as part of Ford Motor Company’s Drive 4 UR Community program. This event will take place on Sunday, October 11 from 10 a.m. to 3 p.m. For every person who test-drives a new Ford vehicle at this one-day event, Ford Motor Company and Tom Holzer Ford will donate $20, up to $6,000, to Warriors for Warriors.

Your donation could be the one last dollar that leads to a cure!